Spring is finally in the air here at Pengelly, the hedgerows and banks are full of daffodils and primroses, the birds are singing and tiny buds are appearing on the trees.  And exciting happenings are afoot with more than just flowers springing up here at Pengelly. 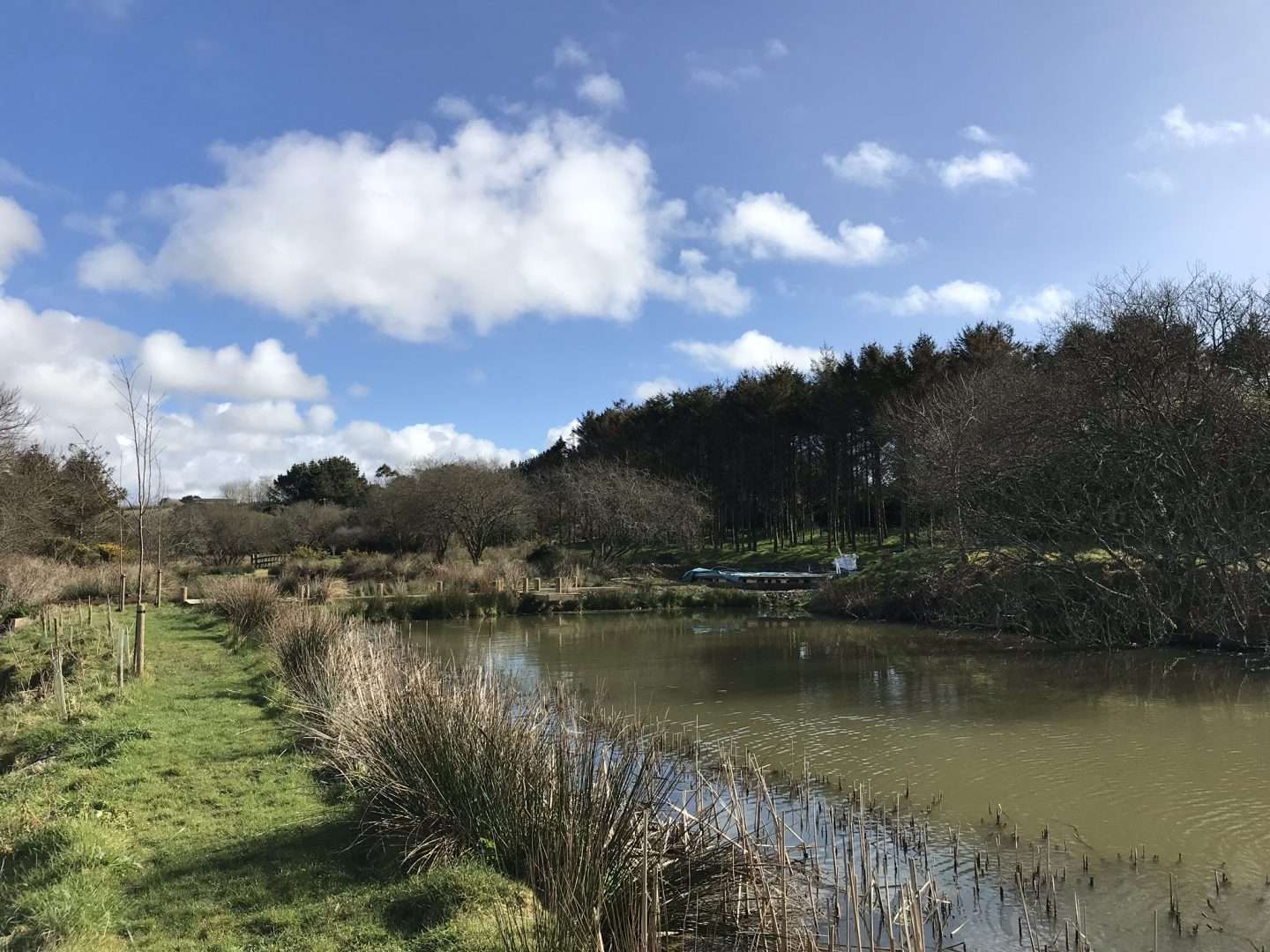 Rewind two weeks and it was quite a different story.  Cornwall was covered in a blanket of snow… 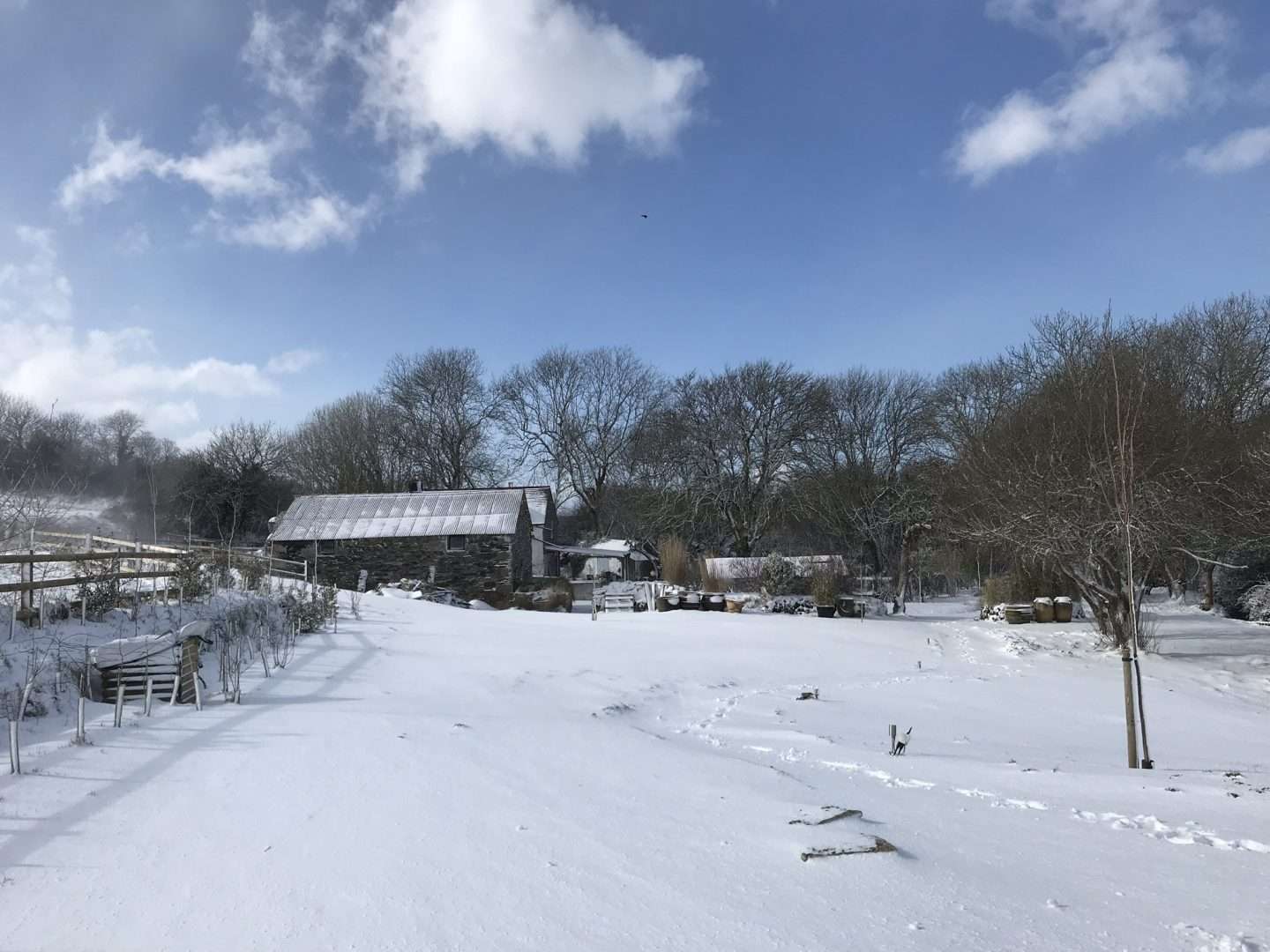 What the heck?!  Cornwall doesn’t do snow.  Like ever.  Well maybe twenty years ago or something.  So for three days we were thrown into chaos with cars slithering about on unsalted roads, all the schools closed and half the county stuck in their houses.  On the upside Pengelly looked beautiful, like a true winter wonderland.  The Buddha’s were covered in snow, the ponds froze over and we enjoyed a bit of sledging on a surfboard in the garden. 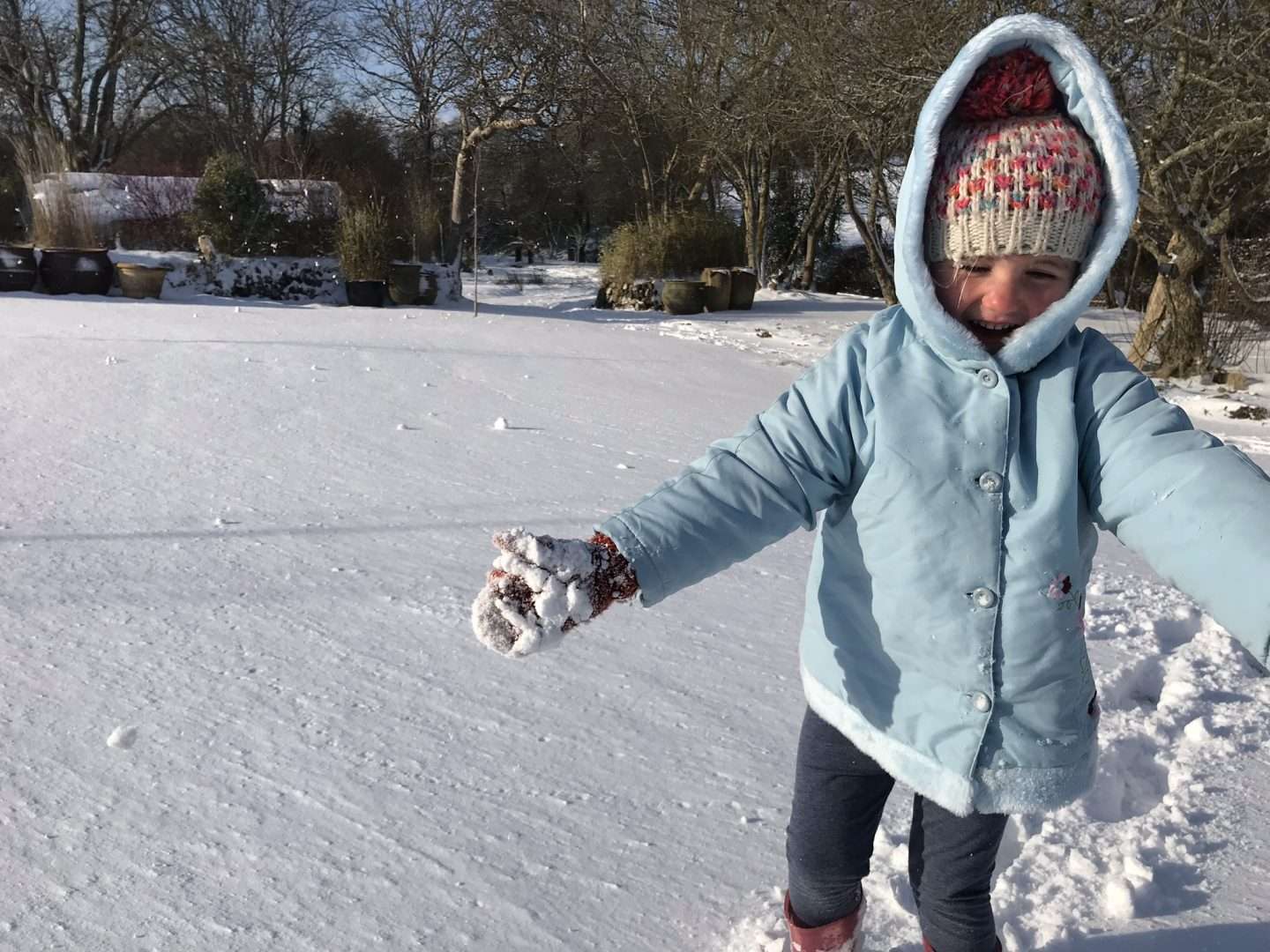 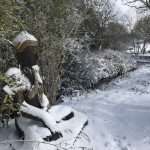 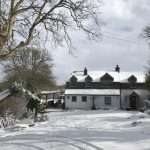 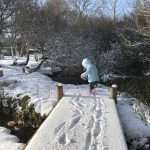 We thought we’d seen the last of snow for the next 20 years.  But we were all taken off guard by yet more snow over the past couple of days.  Erm what??!!  Luckily Mini-Beast-From-The-East didn’t stick around too long in Cornwall and we can see the land, daffodils and primroses once more.  Good thing too, snow is so last season darling.

So now it’s back to business.  Never one to rest on his laurels, Jim is currently immersed in about 70 different building projects at the same time.

Project 1 – add a conservatory onto the house

We have already converted part of our downstairs into The Mill Annexe, a gorgeous holiday rental for two, available on Air Bnb.  So then we thought…wouldn’t it be lovely to create more sunshiny space by adding a conservatory onto the house.  Jim and Billy have worked through rain and snow to add the foundations on and it currently looks like this: 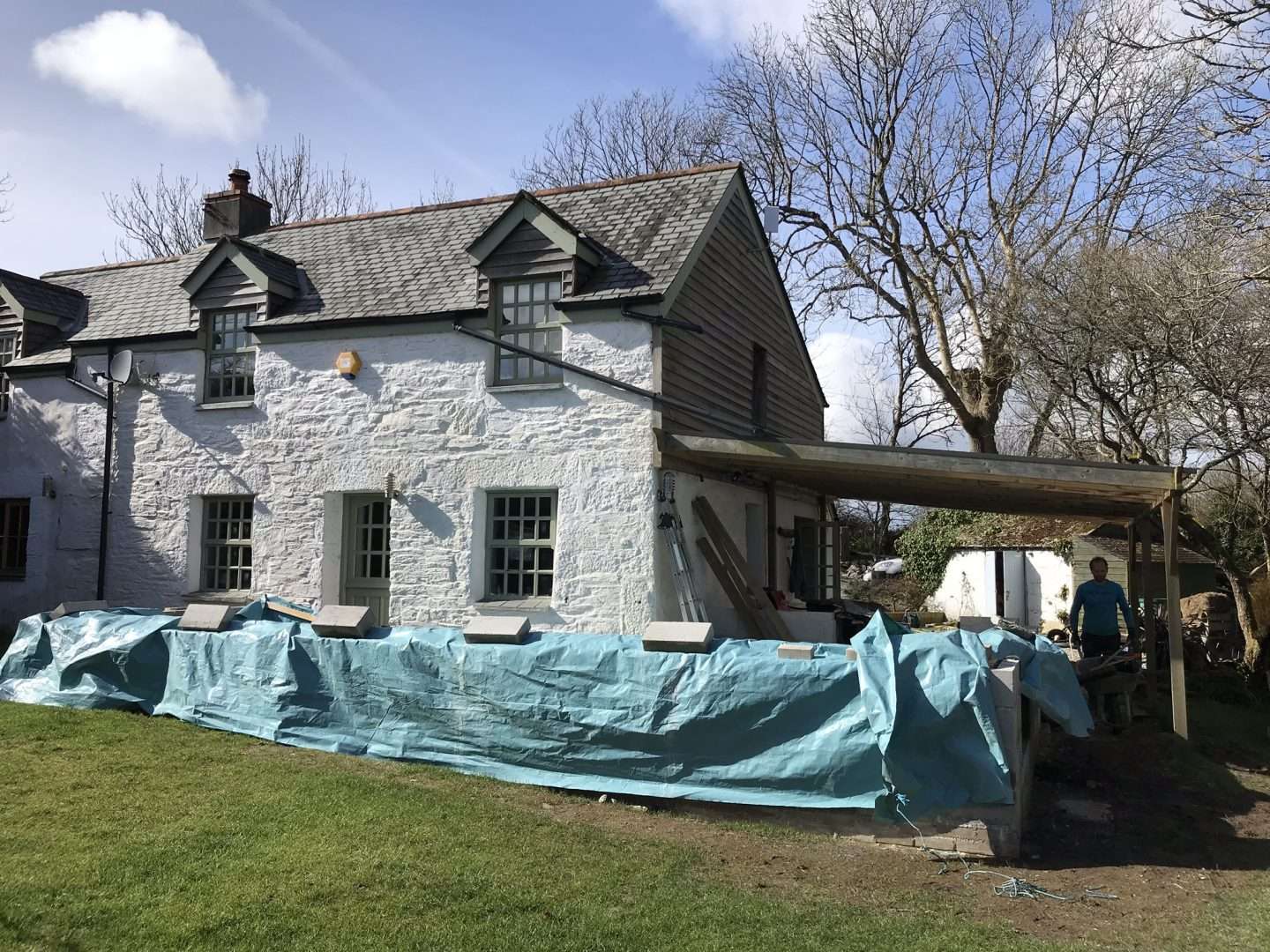 As my mother recently commented “You really do need to get this finished off darling”.  Yes thank you, you are quite right it looks a bit of a shambles.  However it will be fab-u-lous when finished.  Hold that vision.

Project 2 – re-do the outside deck

This is sort of a side project to the conservatory as it’s doors will open onto our outside deck area.  But it did also need doing as the existing deck was a bit rotten and slippy.  Again Jim and Billy are on the case (how do they get time in the day), ripping up old deck, sanding, sawing, chopping and drilling to create a shiny new deck and pathway to the garden.   And here’s the completed deck, ta-da!! 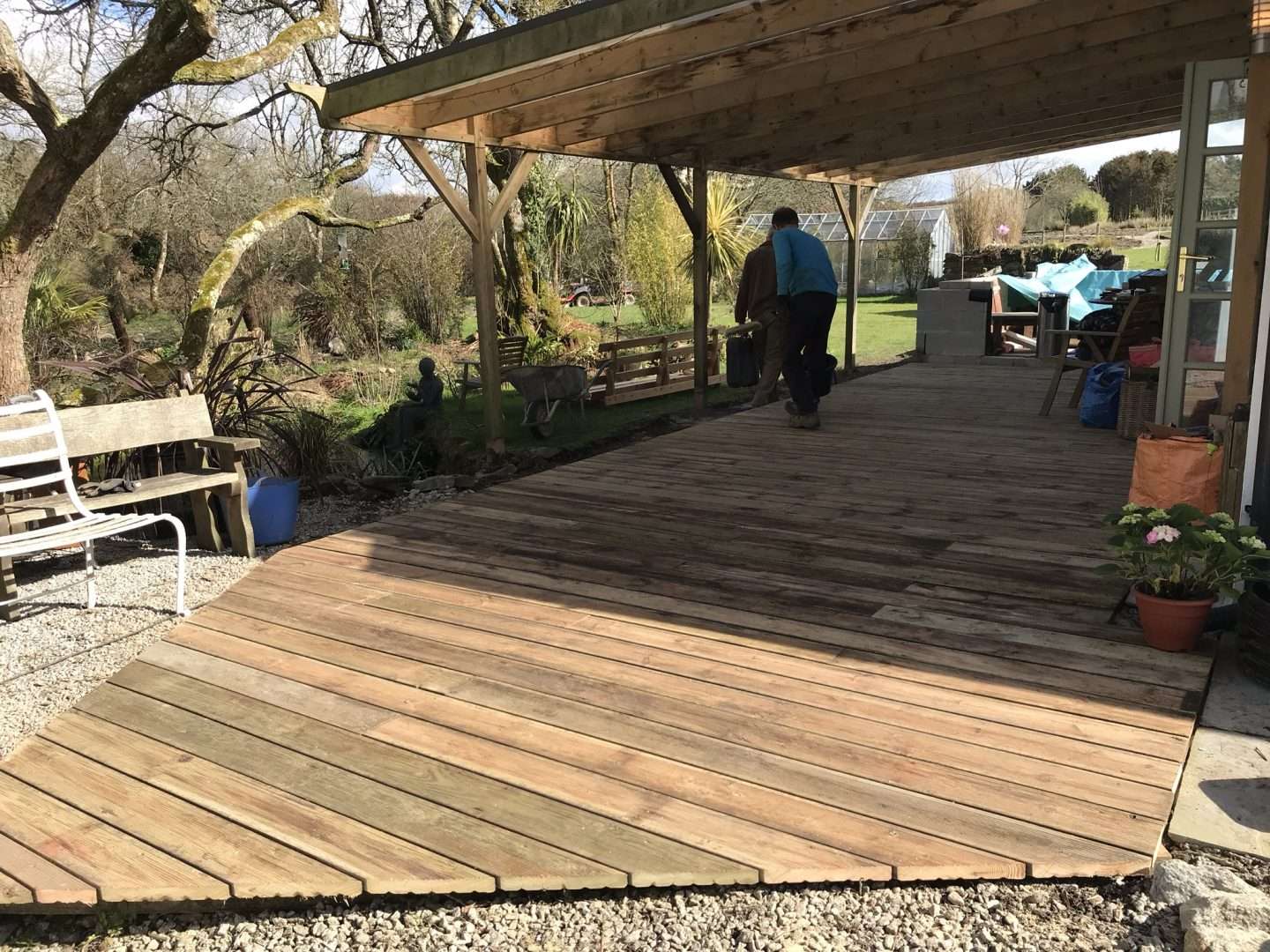 What a lovely deck!

Ahh yes, you were wondering are we actually doing anything with our holiday accommodation by the lake.  Well I can confirm that as well as everything else Jim and Billy have completed the ensuite yurts’ foundation and all the services for water, plumbing and electrics are in.  Phew.  Next step is for the underfloor heating to be installed.  And then finally in early April the yurts themselves will go up.  It will be a landmark moment for us when we finally see how they will look like in situ. EEEK! 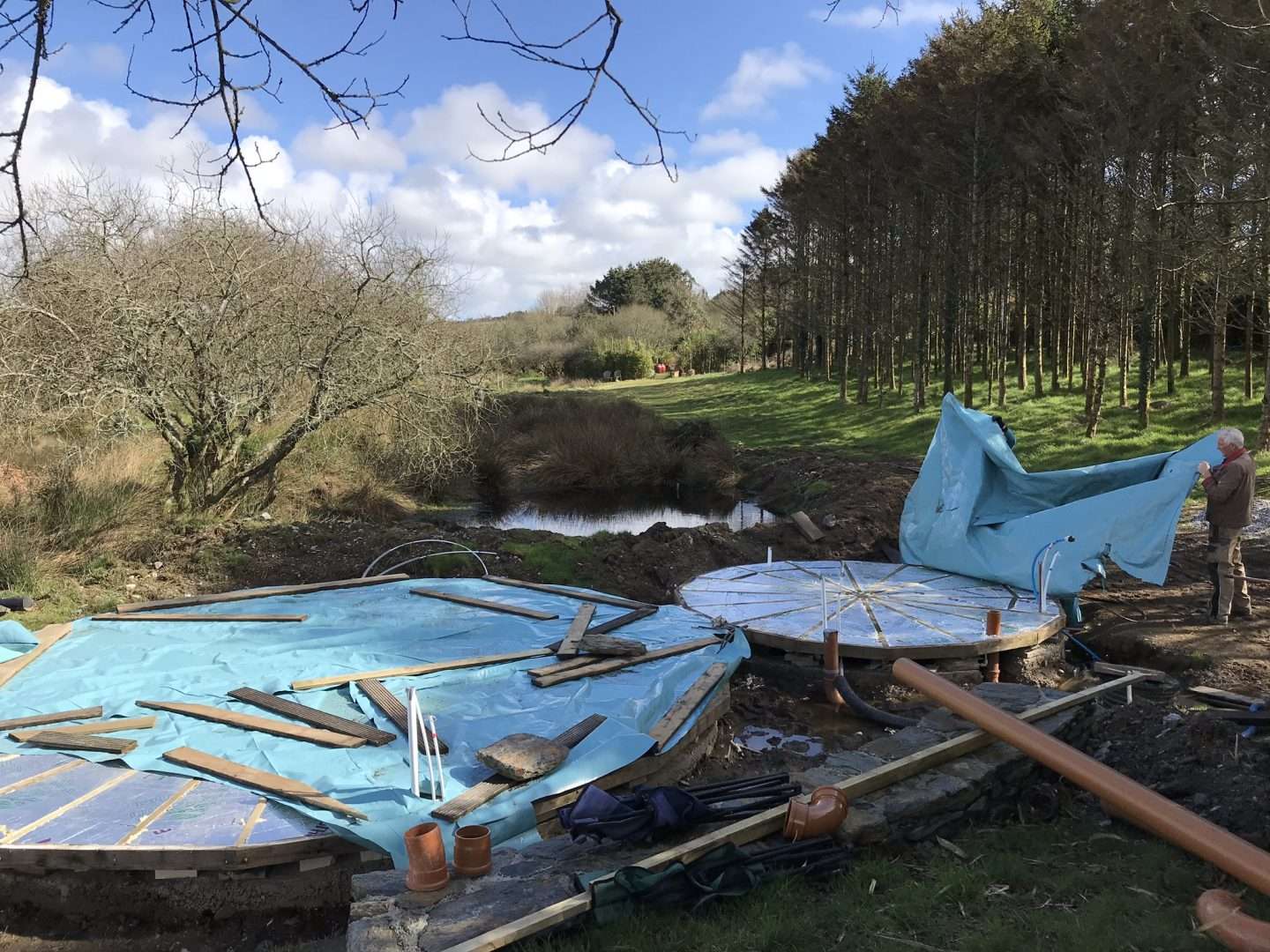 The grand unveiling of the Yurts’ (base-bit)

Meanwhile we’ve been racking our brains to think of a good name for our Yurt.  Well it’s two yurts really;  the main yurt is home to bedroom, lounge and kitchenette.  While the second smaller yurt is adjoined to the main one and will have a luxury bathroom including actual bath.  Hell yeah, this is glamping but not as you know it!  There’s a lovely boardwalk area that leads from the door of the yurt across the two lakes to a sun terrace.  And on the bank alongside there will be an outdoor kitchen area and fire pit overlooking the first lake.

The view up towards the Yurt plot

It’s going to be AMAZING if I do say so myself.  So what can we call said yurt(s)?  The Yurt really doesn’t do it justice.  I’m currently thinking The Lake Yurt in a sort of does-what-it-says-on-the-tin approach.  But I’d love to hear your ideas… what do you think we should call it??

I know, there isn’t much to see above ground right now.  But the services are in, the ‘treatment tank’ (poo tank I like to call it) installed and foundations have been started.  I think you’ll have to hang on a bit till my next Postcard to see more: 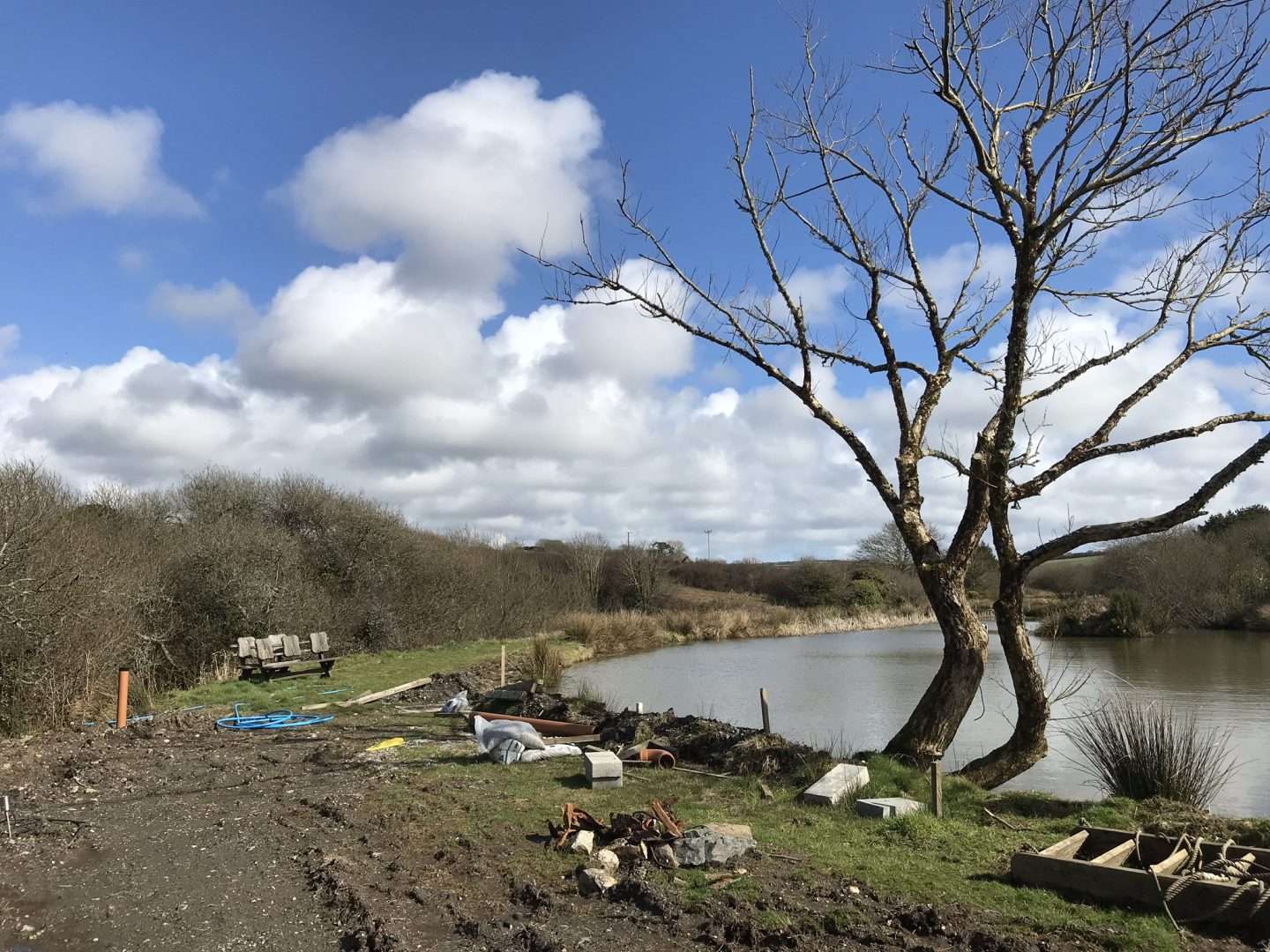 The Boat House (a LOT of imagination required)

But just to say for now that this will be our more luxurious accommodation so it’s going to be pretty special and more accessible for those who feel that nights under canvas (even very luxurious canvas) are a step too far.

There are literally about another 67 projects on the go (at least) but there’s not space enough here to tell you about them all.

So instead I’ll move on to some photos of our Feb holidays in Spain, where we smugly set off to avoid the wintery weather here.  All didn’t quite go to plan.  We did get some gorgeous (although chilly) sunshine and we enjoyed a good potter round Seville, Cordoba and Granada. 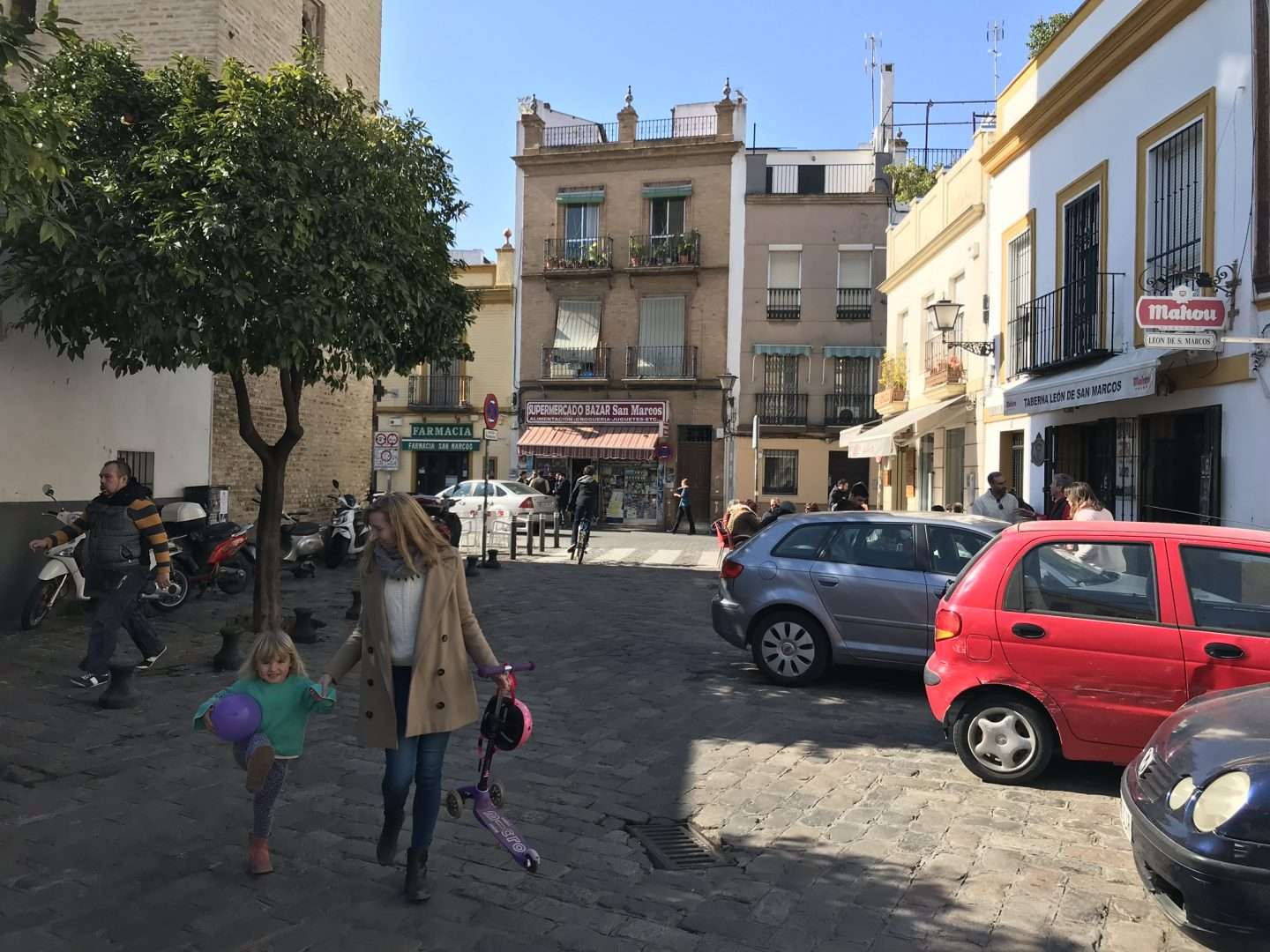 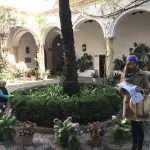 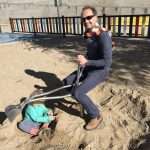 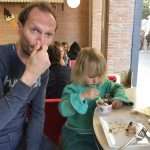 Hanging out in sunny Spain

And then I got chicken pox halfway through the hols.  Again – what the heck?!  Surely I’m too old for childhood viruses!!  Apparently not.  So anyone perusing our photos will notice that I don’t feature in any of them beyond Granada.  I was there.  Just a bit poxy and spotty.  One expensive trip to a private doctor and one even more expensive prescription later I was just about recovered enough 10 days later to get on the flight home without any problems. 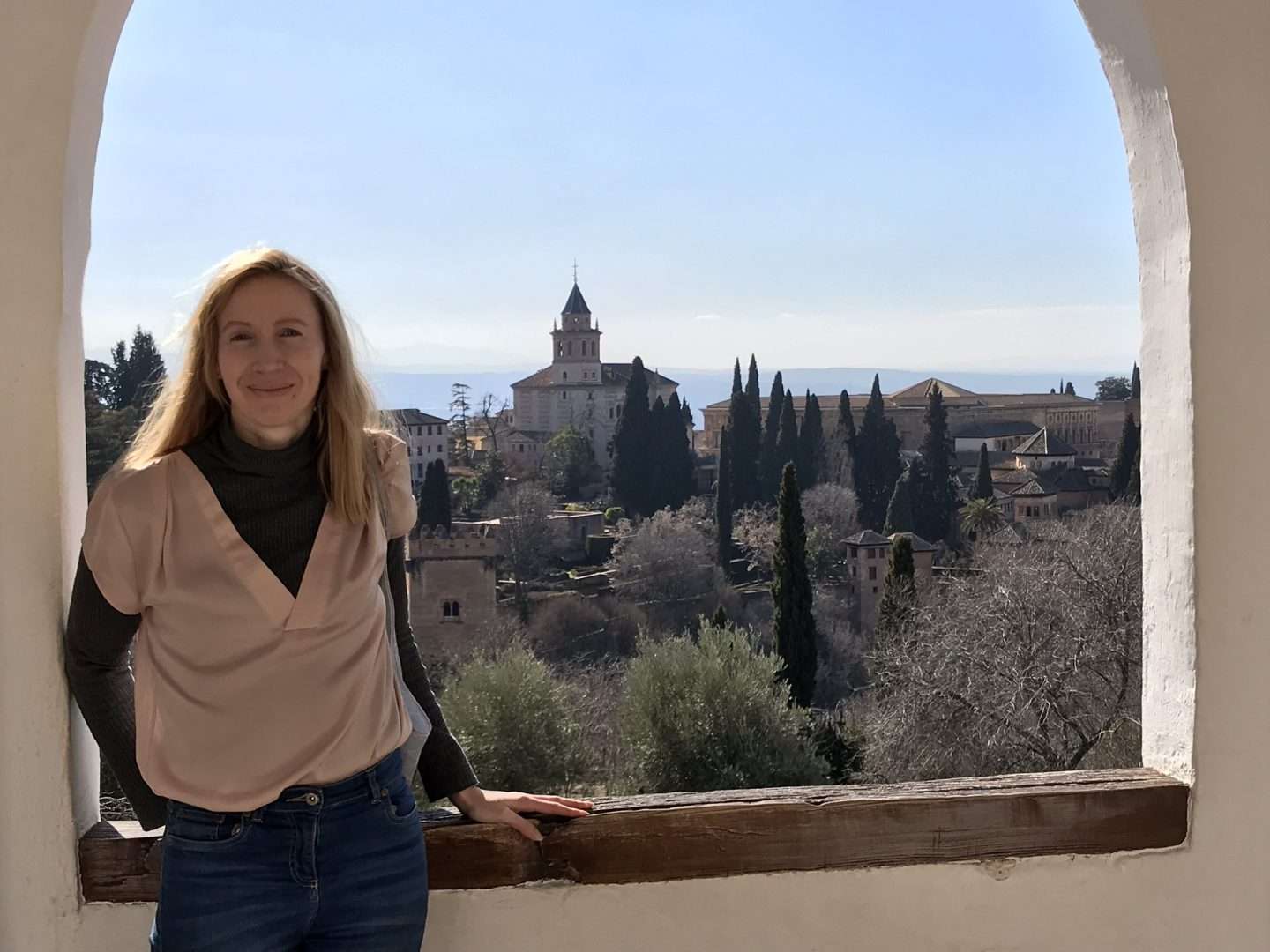 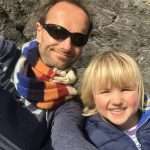 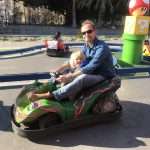 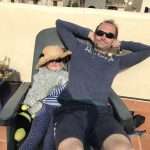 At least I got to see the Alhambra!

So, my top tips for any adults with chicken pox are:  (1) Don’t catch in the first place. There is a vaccination you know.  Ahh the benefits of hindsight…  Ok too late, in which case:  (1) See the Doc asap.  (2) Stock up on bucketloads of tea tree oil. (3) Make sure you are located in nice Spanish apartment with sun terrace where at least you can languish about in style.  Big thank you to Jim for putting up with the “poxy wife” while I was ill.

On that spotty note, I wish you all a healthy and happy springtime.  No more bugs, colds or viruses!  More (germ-free) news to follow in my next Postcard from Pengelly… 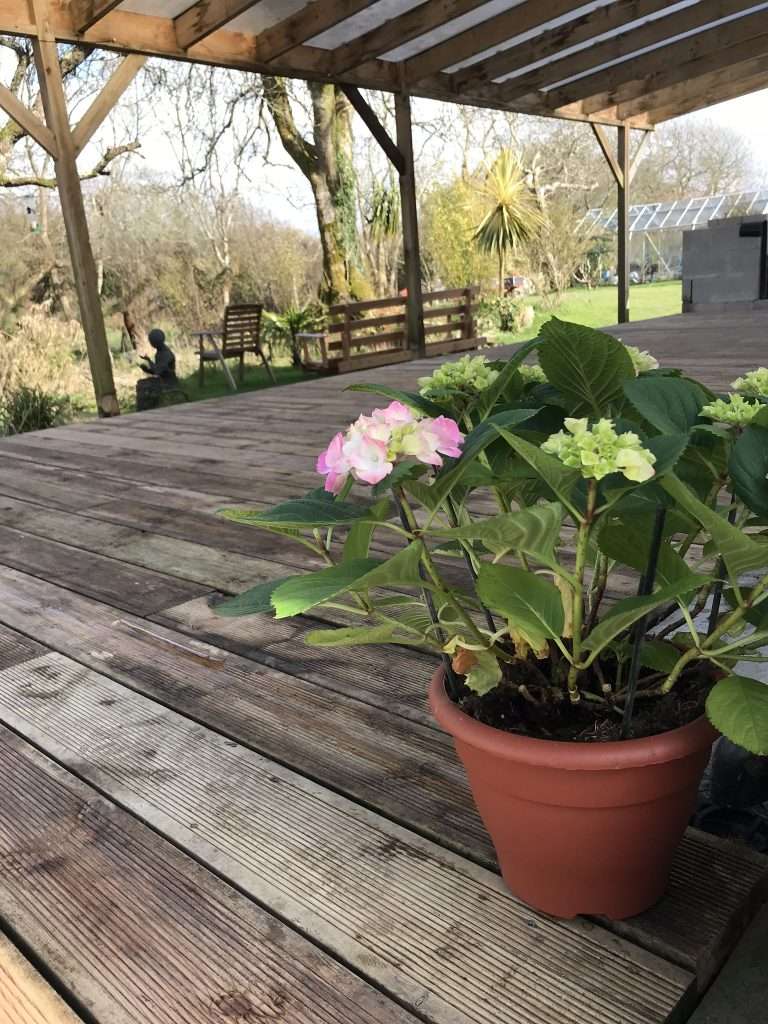 Ohh just look at that deck!